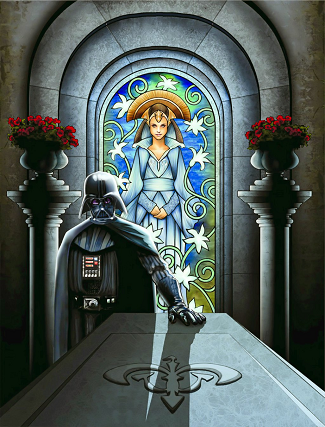 Quoth the Sith Lord, "Nevermore."
"Ah, distinctly I remember it was in the bleak December,
And each separate dying ember wrought its ghost upon the floor
Eagerly I wished the morrow, vainly I had sought to borrow
From my books surcease of sorrow — sorrow for the lost Lenore
For the rare and radiant maiden whom the angels name Lenore
Nameless here for evermore."
— The Raven, Edgar Allan Poe
Advertisement:

The Lost Lenore, a.k.a. the Dead Love Interest — not parent, not sibling, not offspring, love interest. One of The Oldest Ones in the Book, named for the famous deceased in Edgar Allan Poe's "The Raven". In short, the three defining criteria are:

In determining whether a character who dies during a story can be classified as a Lost Lenore, the third criterion above is the most important: in order to fit this trope, the character must have just as much, if not more, importance to the narrative dead than they would alive. For example, Anna in Van Helsing is the hero's love interest and dies at the climax of the story, but she is not a Lost Lenore as all that happens after she dies is that Van Helsing is cured, lays her to rest, sees her happy with her family in the afterlife and roll credits. She does more for the story alive than she does dead.

Characters who lose Lenore can go on to have other love interests, particularly if she is a Posthumous Character or the story is part of an ongoing series. However, in order to qualify for this trope, it must be clear that they grieved strongly for her, and that overcoming their grief and learning to love again is a significant part of character/plot development. Sometimes subsequent love interests never entirely replace Lenore. It can go all the way to a Love Triangle.

The Lost Lenore's mode of death can vary but popular choices include:

If she left children behind, the children often have considerable emotional baggage to deal with, including a father (or father-figure equivalent) whose grief can render him overprotective, neglectful, abusive, or absent. The children may feel, or even be told explicitly, that they are either too much like the Lost Lenore, or else not enough like her. Angst ensues.

If the Lost Lenore was murdered, a Roaring Rampage of Revenge usually ensues. Which leads to a crucial identifying point: many Gwen Stacys are also Lost Lenores, but not every Lost Lenore is also a Gwen Stacy, as someone explicitly blaming themself for the Gwen Stacy's death is an identifying criterion for this trope, whereas this is not always the case for a Lost Lenore.

Occasionally, due usually to a dramatic twist Lenore turns out not to be dead after all, or dead for reasons by means other than previously believed. The Lost Lenore can sometimes be brought back to life through an act of Time Travel or by magic but her death must be treated as a real event within the story. However, even if the audience knows or characters subsequently discover a twist in the tale, she must still satisfy the major criteria of having been loved and her perceived loss being of ongoing significance in order to qualify for this trope.

Not to be confused with the comic book character Lenore the Cute Little Dead Girl who tends to cause death to other people rather than experiencing it herself.

Contrast with: Disposable Woman, Forgotten Fallen Friend, Oh, and X Dies. The One That Got Away isn't dead, but still a lost love.

As this trope deals in part with characters who die during the course of a story, beware of unmarked spoilers!

Nightfall talks about her Gary

Nightfall tells Gary about how she lost the version of him in her timeline, and expresses sadness that after years of trying she's finally reached a world where Gary lives but he doesn't want her.

Nightfall talks about her Gary

Nightfall tells Gary about how she lost the version of him in her timeline, and expresses sadness that after years of trying she's finally reached a world where Gary lives but he doesn't want her.