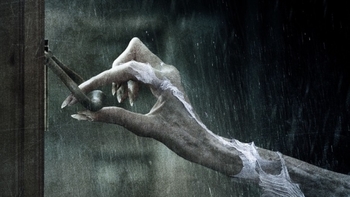 "The last man on Earth sat alone in a room. There was a knock on the door."
— "Knock", by Fredric Brown
Advertisement:

Loud noises, especially unexpected ones, can be extremely jarring. Just as uncomfortable for many is the thought of dealing with uninvited guests, or accidentally letting someone untrustworthy into your house. When these two fears are combined, you can evoke fear from a situation as mundane as someone knocking on a door.

The noise won't stop for more than a few seconds at a time; if anything, it'll just get louder and faster, echoing through the house as the owner, rightfully, tries to avoid the confrontation on the other side. Sometimes the only way to get the knocking to stop is to open the door, which only leads to problems when the real fear comes from who is on the other side... However, even if they do go away, there's no promise they'll stay gone, or that they won't try and get in the house some other way. Sometimes, though, the knocking itself is the only issue, and it can even function as a Jump Scare.

Mood Whiplash follows if the person on the other side is innocent and trustworthy; more horror and mystery will ensue if it's discovered that there's nobody at the door. In most cases, though, the person at the door will be someone dangerous and untrustworthy, or at the very least, unwelcome.

Unrelated to The Last Man Heard a Knock..., but the story itself is an example of this.

A popular myth arose in the 1930s when campgoers began to have sightings of Skinwalkers.

A popular myth arose in the 1930s when campgoers began to have sightings of Skinwalkers.