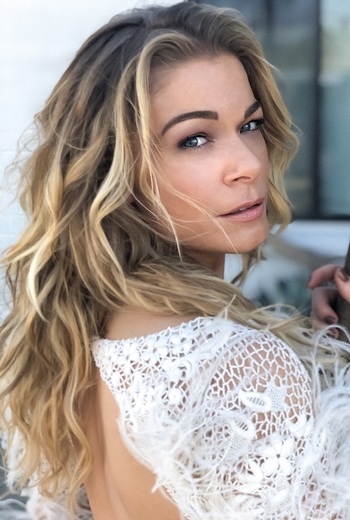 Margaret LeAnn Rimes (born August 28, 1982 in Jackson, Mississippi) is an American Country Music singer and actress known for breaking out when she was only 13, but also surviving into adulthood as a country-pop star.

Rimes began singing as a child and through the assistance of songwriter and DJ Bill Mack, signed to Curb Records as a teenager. Rimes's debut single "Blue" was a smash hit, leading to the release of her debut album. Also coming from the album was her only #1 country hit to date, "One Way Ticket (Because I Can)".

Her biggest hit came in 1997 with "How Do I Live", a Diane Warren-penned ballad that was never even put on an album, yet remained one of the biggest selling singles of any genre.note She recorded it for the Nicolas Cage movie Con Air, but the Walt Disney company thought her version was too poppy, and that a teenage girl singing a song so mature wasn't believable. For the 'official' film track, they went with a version recorded by Trisha Yearwood, who was in her late 20s at the time.

Interspersed with her hot country albums were a series of compilations, and soundtrack cuts to spare: "Looking Through Your Eyes" from Quest for Camelot, "I Need You" from Jesus: Music from and Inspired by the Epic-Mini-Series (Jesus (1999)), and "Can't Fight the Moonlight" from Coyote Ugly, as well as "Light the Fire Within", the theme song of the 2002 Winter Olympic Games at Salt Lake City, Utah. She moved entirely to pop with minimal success on Twisted Angel, but by 2004, she returned to her country roots with the more mature This Woman. This album and followup Family both produced a few country hits, such as "Nothin' 'Bout Love Makes Sense", "Probably Wouldn't Be This Way", and "Something's Gotta Give". 2011 brought Lady & Gentlemen, a concept album featuring her singing female-driven renditions of male-oriented country songs. While her subsequent albums have been prone to delays and low-charting singles, she has continued to record well into her adulthood, marred only by a couple minor incidents (a lawsuit against her father and producer, Wilbur C. Rimes, label issues typical of Curb Records artists, and an affair with actor Eddie Cibrian among them). A 20-year contract with Curb ended in 2016, leading her to move to RCA Records in 2017.

Due to the contrast of her age and powerful voice, Rimes was often compared to Tanya Tucker and Brenda Lee, two other country ladies who began in their teens.