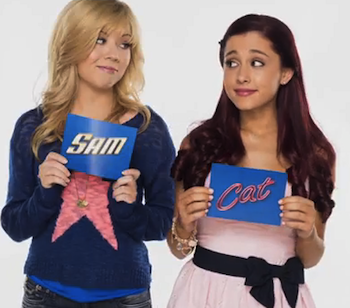 Sam & Cat is a Nickelodeon teen sitcom, created by Dan Schneider. It is a Spin-Off from both iCarly (Sam Puckett, played by Jennette McCurdy), and Victorious (Cat Valentine, played by Ariana Grande). With the end of iCarly approaching, the network was looking to create a new show for Jennette to star in (continuing the tradition of making shows with actors from the previous show, and Jennette's contract formed at the start of iCarly gave her her own show no matter what). It eventually settled on this crossover Spin-Off.

Sam, after Carly moves away to Italy, has decided to wander the country. Leaving Seattle and spending a month traveling the States, she arrives in Los Angeles, where she meets Cat. After a day of hijinks that end in the two bonding, as well as being awarded a life time of free cheeseburgers, Sam and Cat decide to live together after Cat's grandmother, Nona, goes to live in a retirement home. During the day the two babysit three kids, Max, Chloe, and Darby, who were supposed to be babysat by Cat's grandma, the mom, happy with how the two babysat, offers to let them do it again which leads to them starting a babysitting business.

It was greenlit for 20 episodes that were filmed in early 2013 and the first episode premiered on June 8, 2013, with the last episode of this order coming out in November. Nick ordered an additional 20 episodes on top of the original order, which began airing on January 4th, 2014. On April 4th, 2014 the series was put on "permanent hiatus

," likely due to problems on set. The series was officially cancelled in mid-July

, and the final episode aired on July 17 with 35 of the planned 40 episodes produced. Read Ariana's Facebook/TwitLonger post on the subject here

Not to be confused with an unrelated comics series about a dog and a bunny.