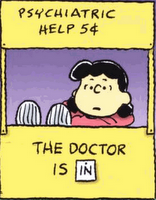 Giving unwanted advice since 1959.
Cubert: Actually, thanks to Dwight's brilliant accounting and my unaccountable brilliance ... our paper route now has over a million customers!
Dwight: We're finally making more money than you guys! Aren't you impressed now, Pops? Aren'tcha? Aren'tcha?
— Futurama, The Route Of All Evil
Advertisement:

These children are great with money and are always looking for ways to make more. They always seem to be coming up with one Zany Scheme after another and will always try to cheat other children, and occasionally adults, from their cash. If they're good at it, they could also be a Child Prodigy or a Teen Genius. In shows with a particularly lax depiction of realism, or if the kid's supposed to be just that good, these children could even have their own legitimate companies and firms with actual clients who take them seriously.