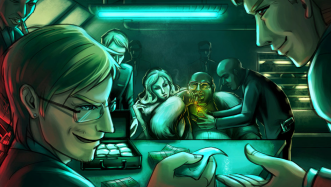 .
Used with permission.
"[Jubbulpore's] inhabitants brag that within a li of the pylon at the spaceport end of the Avenue of Nine anything in the explored universe can be had by a man with cash, from a starship to ten grains of stardust, from the ruin of a reputation to the robes of a senator with the senator inside."
—Citizen of the Galaxy
Advertisement:

A Black Market is an established "underground" economy which deals in the transfer of illicit goods and services, the exact nature of which will vary wildly depending on era and location. The Empire may be actively trying to stamp it all out, or taking its cut under the table and vigilantly looking in some other direction. The stuff for sale may be worthless crap, lethally dangerous, genuinely useful, or, most likely, a mixture of all three. But you're going to pay through the nose, and when you arrive to pick up your purchase, it might be a good idea to come armed. Or send someone who knows what they are doing. As there are no price stickers, haggling is used to arrive at the price.

In Real Life, the term is generally used to describe the encompassing gestalt: a collection of individuals and covert operations which can be spread across a wide geographic range, dealing in goods which may be entirely illegal (such as hard drugs, military weapons, human organs, human trafficking), or legal but regulated (such as prescription drugs and rationed goods), legal but people want to evade taxes (cigarettes) or entirely legal but acquired illicitly (such as stolen goods or goods that Fell Off the Back of a Truck). As well, illicit services are available, ranging from prostitution to off-the-books plastic surgery.

The archetypal example probably being the vast array of illicit transactions which occurred in Great Britain during World War II; in that particular case, it was rationed food, clothing, textiles, cigarettes, gasoline, nylons, and real and forged ration books which were being bought and sold.

A subcategory of Black Market are the underground channels for buying goods and services in prisons. The items on the prison black market might be everyday items that are easily available in the outside world, but in jail, they are contraband that'll get you thrown in solitary if you're caught with them. Items that are legal outside jail but contraband inside include cell phones, cigarettes and liquor. Illegal items are sold too, such as drugs.note Necessity is the mother of invention, and when it comes to prison smuggling, there is an impressive repertoire of techniques. Accomplices outside the jail put contraband in tennis balls and throw them in, hide them inside gifts, and even fly small items in with drones.

Sometimes you will encounter a literal Black Market, a covert shopping emporium complete with merchants hawking their dubious wares from established stalls. This latter type is often a subset of the Bazaar of the Bizarre, with everything for sale and the outright illegal stuff lurking around the edges. The black market goods may be offered in a private, invitation-only section of a innocuous-seeming front business, which looks normal except for the 6'4" Bouncer at the door.

Honest John, The Scrounger, The Rat, Venturous Smuggler and obviously the Friend in the Black Market will often be found thriving in this environment (and possibly an undercover cop or spy doing The Infiltration), but they'll just be manning one of the (literal or metaphorical) stalls; the ultimate power will usually be in the hands of The Syndicate. Unless it all comes full circle, and the whole thing is just another branch of The Empire...

The shady Toad sells Things in his illegal black market to get you hooked.

The shady Toad sells Things in his illegal black market to get you hooked.