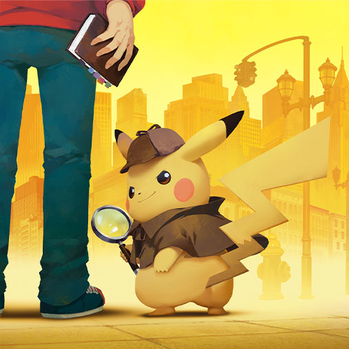 Mysterious incidents of Pokémon going into rampages in Ryme City have happened for over a year now, and Tim Goodman's father Harry Goodman was the lead detective getting to the source of the incidents until he went missing, with only his Pikachu being found at the scene where Harry had a car accident. In the present time, Tim himself decides to investigate his father's disappearance and partners up with Pikachu, whom he finds out behaves much differently than when he used to and can talk human language, though only Tim is able to understand Pikachu's cries. Can the two uncover the truth behind the incidents, why Harry went missing, and what caused Pikachu to lose his memories and gain the ability to talk?

The official Japanese trailer for the video game can be seen here.

It was released on the country's Nintendo eShop on February 3, 2016. An expanded version of the game received an international release, including North America and Europe, on March 23, 2018, which also saw the release of a rather large Detective Pikachu amiibo.

Legendary Pictures and Warner Bros. produced a Live-Action Adaptation called Pokémon Detective Pikachu, with Rob Letterman directing and him and Nicole Perlman writing the screenplay and Ryan Reynolds voicing Detective Pikachu. The film was released on May 10, 2019.

It's one of the few official live-action American-made media in the Pokémon franchise after Pokémon Live!, which was based on the anime.

A follow up to Detective Pikachu is planned for the Nintendo Switch and is set to conclude the story started in the 3DS title.