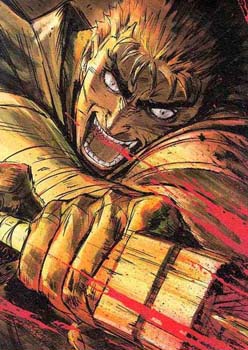 His name is Guts, and he's about to hack out yours.
"Bodvar Bjarki ploughed into them now, hacking two handed, his only thought to do as much damage as he could before he fell. And now they fall in heaps before him, one on top of another, and both his arms are bloodied to the shoulder, and he felled so many, the dead were stacked all about him. He stormed on as if he was insane."
— The Saga of Hrolf Kraki
Advertisement:

The Berserker is a character who throws himself into a fight with such reckless abandon, it seems like he wants to die. It could be over-enthusiasm, overconfidence, Unstoppable Rage, or the desire to die (in battle). Whatever the cause, it's usually accompanied by a bellowing warcry. Sometimes with total obliviousness to whether he's actually fighting the enemy. And he never, ever retreats.

For extra points of terrifying spectacle, oftentimes the Berserker is inexplicably immune to pain and/or injury. It's one thing for the screaming, frothing lunatic hacking people down left and right to simply be too savage to get near, but when they take so many arrows they look like a porcupine and it just pisses them off even more it is quite another. When they shrug off a cannonball with little more than a feral scream, that's usually sufficient for the opposing army to collectively shit itself and run.

Berserkers are equally capable of being good or evil. If they're good, then out of battle, they will likely brood about whatever it is that causes their berserk fits or remorse about losing control of themselves. Most end up one of two ways: being taught by their teammates to control themselves after a particularly close call, or dying in a dramatic fashion while lamenting that they died without completing their mission. Good Berserkers are also very prone to Heroic Sacrifices, for very obvious reasons. When this is not played for drama, the Berserker may have a Boisterous Bruiser attitude when not in his battle rage. An evil Berserker, on the other hand, is generally just unrepentantly Ax-Crazy and very often Chaotic Evil.

The trope's title refers to the berserkr of Viking Age Scandinavia: Warriors who are said to have thrown themselves into battle wearing only animal hides for armour and with no regard for their own safety. Their 'battle-madness', whose exact nature is presently unknown (some say it came from ingesting weird mushrooms or some other mind-altering substance before a battle) is said to have been a gift from Odin. The word "berserkr" means "Bear-shirt" in Old Norse, referring to either their going into battle with the ferocity of bears or for wearing bear pelts into battle. Their effectiveness in battle is up for debate, but they were an imposing and terrifying nightmare to the continental Europeans — and, if The Icelandic Sagas are to be trusted, to their own civilization. Some Norse societies would eventually outright ban the practices of the berserker, no doubt influenced by its people converting to Christianity.

With terms used in sources that speak of the Norse berserkr also occasionally giving off some implication of Shapeshifting (or at least stating their ferocity was like they became savage animals...), it's a possibility the tales of the berserker would later inspire that of the Werewolf.

Berserkers that truly do wish to die in battle are better known as Death Seekers — those who don't often overlap with the Blood Knight or Barbarian Hero instead. When foolishly done without any regard to strategy or planning, the Berserker becomes a Leeroy Jenkins. Because of its historical root, berserkers are likely part of a Proud Warrior Race.

Compare Berserk Button, which is when pressing a character's Trigger turns them into this. Compare Hulking Out for cases where the berserk character changes physically as well as mentally. If the Berserker fights this hard so that no one else needs to help him, he might also be a Martyr Without a Cause. Contrast Blinded by Rage, where a berserker's blind rage proves to be his undoing.

When the Berserker is pitted against an ace who matches him in combat, but also has a much cooler head on his shoulders, see Arrogant God vs. Raging Monster.

This trope should not be confused with the recurring character title of the Fate Series, the now-disbanded Australian grindcore band The Berzerker, the Berserker universe, the manga franchise Berserk, the classic arcade game Berzerk, or the 1967 B-horror movie Berserk.