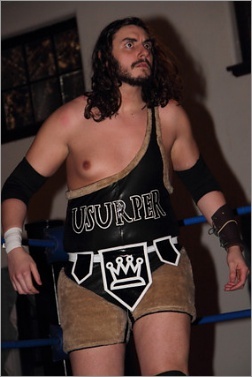 "OFF WITH HIS HEAD!"

Josh Thorman (born July 7, 1988) is an American Professional Wrestler from Michigan as Oleg The Usurper. He debuted in 2008 as Josh Thor in CLASH Wrestling

and wrestled for that promotion, Pro Xcitement Wrestling, Beyond Wrestling, ECPW, NWA On Fire and ESW. In 2012, he changed it to Usurper, finally becoming Oleg The Usurper in Wrestling Is Fun!, debuting under that name at WiF! Hasta Banana on September 29, 2012. His first major moment came at WiF! Ripe for the Picking on July 27, 2013. The Wrecking Crew (The Devastation Corporation [Max Smashmaster and Flex Rumblecrunch], Jaka and Oleg) defeated Knight Eye For The Pirate Guy (Lance Steel and Jolly Roger), Dragon Dragon and Shane Storm when Oleg blasted Dragon Dragon with Off With His Head!, literally knocking off Dragon Dragon's head. He arrived in CHIKARA in 2014 as a member of The Wrecking Crew who were part of The Flood, the amalgamation of Heel groups out to destroy CHIKARA. At the start of 2015, UltraMantis Black drafted Oleg with The Batiri (Obariyon and Kodama) for his Challenge Of The Immortals tournament team The Arcane Horde. At King of Trios 2015 Night II on September 5th, Oleg made his Heel–Face Turn official by blasting his manager Sidney Bakabella with Off With His Head! He has continued to wrestle for CHIKARA and many other promotions ever since. He has yet to win a title.