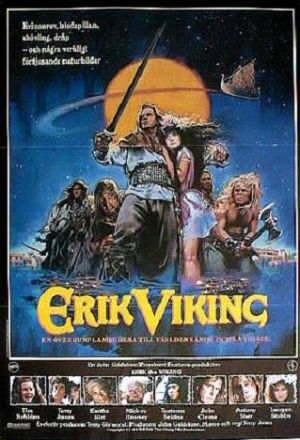 Released in 1989, Erik the Viking is a film written and directed by Monty Python alumnus Terry Jones. The movie follows the adventures of the eponymous Viking, Erik, who one day discovers that he no longer has a taste for the rape-and-pillage lifestyle of ordinary Viking life. Determined to change things, he recruits a band of his fellow Vikings to journey to Valhalla and petition Odin, King of the Gods, to put an end to the Age of Ragnarok. Hilarity Ensues.
Advertisement:

The movie stars Tim Robbins as Erik, and features cameos by Eartha Kitt, John Cleese, Mickey Rooney, and Terry Jones himself. Jones took inspiration for the film (but not the film's title) from his own children's book, The Saga of Erik the Viking.

Jones was unhappy with the finished movie, and later supervised a shorter edit, carried out by his son.