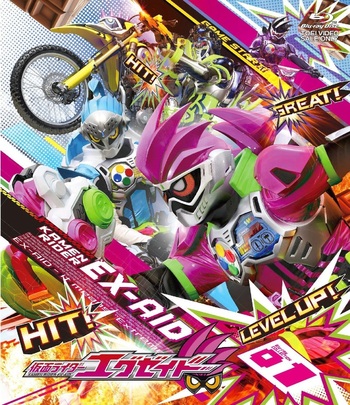 Kamen Rider Ex-Aid is the 2016-2017 entry in the Kamen Rider series; the eighteenth entry in the franchise's Heisei era and the twenty-seventh series overall. It premiered on October 2, 2016, and aired alongside Doubutsu Sentai Zyuohger and Uchu Sentai Kyuranger in the Super Hero Time block.

In the present day, an experimental gaming system created by the Genm Corporation goes awry when critical glitches give birth to sapient computer viruses known as "Bugsters". Bugsters manifest in real life as a biological virus and infect innocent human beings, incubating themselves until they can take over their host and wreak havoc. If the Bugster epidemic cannot be stopped, then the real world will become akin to a videogame world where violence and the Bugsters reign supreme.

Emu Hojo is an inexperienced but earnest pediatrics intern at the prestigious Seito University Hospital. Yet on the Internet, the bumbling Emu is known as "M", a videogame prodigy who can confidently beat any game no matter the difficulty or genre. A chance meeting with Asuna Karino, an agent of the Ministry of Health, sees Emu using the Genm Corporation's "Gamer Driver" system to transform into Kamen Rider Ex-Aid: a real-life videogame hero with the power to save his patients from the Bugster infection.

Yet all is not as it seems. New doctors soon appear with their own Gamer Drivers and philosophies on how best to use them. A mysterious black Palette Swap of Ex-Aid fights against Emu and the other Kamen Riders. A new "Rider Game" is about to erupt over the Rider Gashats that provide power to the Gamer Drivers; just who will claim all of the Gashats for themselves and become the "super doctor and saviour of humankind"?

Voted #8 series in the Heisei era and #8 product overall in NHK’s All Kamen Rider Popularity Vote.

See you Next game