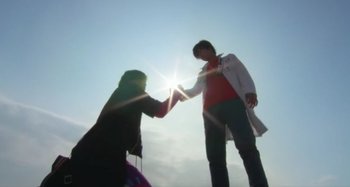 No longer playing as enemies against each other, but as friends who will protect each other and everyone else.

Episode 1: I'm a Kamen Rider!
Episode 2: Two Geniuses? No Thank You.
Episode 3: The Man Comes With A BANG!