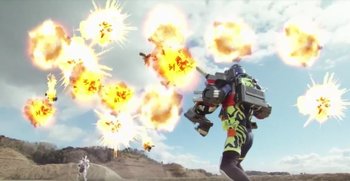 Episode 1: I'm a Kamen Rider!
Episode 2: Two Geniuses? No Thank You
Episode 3: That Guy Appears With a Bang!

Episode 4: An Operation Called Dash!
Episode 5: Everyone Gathers, a Clashing Crash!
Episode 6: A Hollow Beating in the Heart!
Episode 7: The Essence to Some lie
Episode 8: Men, Fly high!