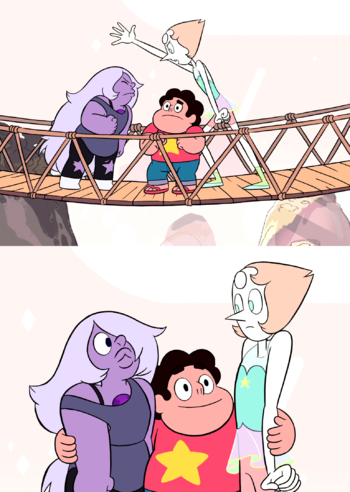 ♪ You might even like being together
and if you don't it won't be forever... ♫
Green Arrow: I still don't think I belong [with the Justice League].
Batman: That's the point, someone like you will keep us honest.
— Justice League Unlimited, "Initiation"
Advertisement:

The Heart is a personality aspect that comes up in just about any ensemble. They're the caretaker, the peacekeeper, or just generally the bringer of goodwill. The barometer of the team's emotional wellness. Their role is based on getting the others to recognize that there are more important things than personal grievances, especially if The Team isn't getting along among themselves, or becoming a group of Knights Templar and Well Intentioned Extremists. This is the person who will argue and fight against the justification of "I Did What I Had to Do". Quite often The Heart character will also be an All-Loving Hero, where they go out of their way to help all of the little people.

Within the ensemble, this character will most often be merged with the role of The Chick. Like The Hero and The Leader, they aren't one and the same, but they often overlap since they are a good fit. The Chick often has a higher emotional intelligence than other teammates and may go out of her way to make sure everyone is taken care of.

Alternatively, The Heart can also be The Hero (in the case of the Magnetic Hero) or The Leader, as their leadership skills keep the team from falling apart. Characters like the Plucky Comic Relief, the Tag Along Kid, and the Gentle Giant are also prime candidates for The Heart since they're often just as lovable to the characters as they are to the audience. This also means their death or loss is most likely to trigger Losing the Team Spirit for dramatic effect.

Due to their usual relative introversion, and tendencies towards pacifism (whether technical or actual), this character is sadly often C-List Fodder and a prime target for a single character (rather than the entire show) version of The Firefly Effect. Many series will start out with a Heart character, but the writers will begin to view them as boring and impossible to write for, so they end up being either Put on a Bus/kept Out of Focus at best or Character Death at worst. This also tends to happen when studio executives want to replace the character with a more talented or physically attractive character, in an attempt to boost ratings.

Given that said characters are usually sweet types, this also tends to seriously anger a certain portion of the fanbase, but because the studio executives care more about ratings than they do about upsetting what is normally a minority, the character will stay dead. If fan outrage is sufficiently vocal, and the executives haven't managed to completely alienate the actor, then the character may come back periodically as a ghost or a clone.

Compare The Face who does the talking on The Team. See also Restored My Faith in Humanity and Morality Chain. Compare The Conscience, Token Good Teammate. Not to be confused with What Kind of Lame Power Is Heart, Anyway?, Heart Is an Awesome Power, or (if Elemental Powers are a factor) a Heart Beat-Down though they often overlap. Contrast with Lack of Empathy.

If you're looking for that fleshy bag of muscles, the Other Wiki is more comfortable with talking about messy stuff like that.

Bow helps She-Ra and Glimmer sort things out. He even wears a heart on his clothes!

Bow helps She-Ra and Glimmer sort things out. He even wears a heart on his clothes!