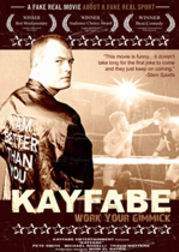 Kayfabe: A Fake Real Movie About A Fake Real Sport (also released as Kayfabe: Work Your Gimmick) is a 2007 Mockumentary about Professional Wrestling written and directed by Michael Raven and Michael Scully, and is a loving tribute to the fiction and reality of wrestling. The story concerns the TCICWF (Tri-City International Championship Wrestling Federation), which is ending due to their lease not being renewed. The individual wrestlers, ranging from the heel Randy "The Rocket" Tyler to his perennial face opponent Steve Justice to the jobbers such as "Lucky" Lupichuk (gang-banger, loser, and blader), El Roboto Magnifico (masked robot wrestler) to "Tomahawk Jacques" (Canadian-French Irish-Native American wrestler) to Casa Nova (Camp Straight muscle man) to Blue Avenger (the rookie, forced to use the most absurd gimmicks), are all trying to make their most of the final shows, and trying to figure out what more there is to life than wrestling.

Skewering multiple wrestling tropes, as well as indy wrestling in general, this film is a must-see for anyone in the wrestling business.

The film has been made available on