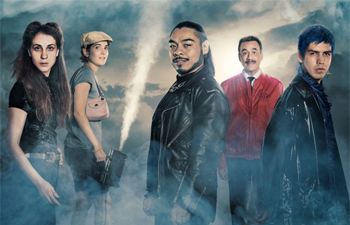 Los Espookys is a horror comedy series created by Fred Armisen, Julio Torres and Ana Fabrega, all of whom also star in the show. Notable for being HBO's first Spanish-language TV series, it's set in a dreamy, unspecified Latin American country and follows a group of friends — kindhearted gore enthusiast Renaldo, mysterious chocolate empire heir Andrés, headstrong and practical Úrsula, and scatterbrained, "indestructible" Tati — as they turn their love for horror into a weird freelance business of providing fake scares to those who need it. Meanwhile, Renaldo's uncle Tico works as a valet parking attendant in Los Angeles, where he goes through decidedly more mundane adventures until he happens upon a potential opportunity for his nephew and his friends.

It was given a pilot order in November 2017, under the title Mexico City: Only Good Things Happen, then given a full season order in July 2018. The first season ran for six episodes in June and July of 2019. After the first season finished airing, it was renewed for a second season, which finished filming in early 2022. On December 2, 2022, it was announced that the show had been cancelled after two seasons.