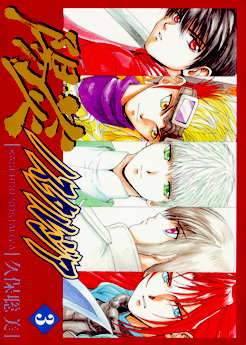 Top to bottom: Kazuma Shudo, Fuwa, Shiranui, Mizuki Kamurougi, Goki. Not pictured—Akira
"Once there were two clans, the Hi and the Yu. Haku, the last king of the Yu was reborn 500 years ago. Princess Mio of Hikami, Kamui of Kai, Kidou of Adumi, Rai of Ryudou, Shiretsu of Kogami and someone from Kouragi tried to seal the spirit of King Haku. Many years later their souls inhabit six NEW bodies and together, they fight once again."
Advertisement:

So it says on the front of the first volume of Kagerou-Nostalgia: the Resurrection, a manga series by Satomi Kubo. Anyone who's picked up this book, is likely very confused as to just what on earth is going on. This is because Resurrection is actually the second half of the series. Unfortunately, it is the only half to be licensed for release in North America. The first half is available only online and in Japan. Further adding to the confusion, only the first few chapters (out of five volumes) have been uploaded onto most manga sites, making keeping up with the plot difficult at best. As a result, much of the information on this page will be largely conjecture.

This is a pity, as Kagerou-Nostalgia is a rather well-written take on an old idea: that of resurrection and rebirth. When the series opens, we are in an AU of medieval Japan. Nearly eighty percent of the country has been conquered by General Kiyotaka Kuroda, and the remaining twenty percent is hard pressed to stay free and unoccupied. We are introduced to Kazuma Shudo, a 14-year old mercenary hired by one of the nations that is resisting Kuroda. A proficient swordsman (swordsboy?) Kazuma is able to use his spiritual power to fight Kuroda's armies of monsters and People Hunters, sadistic soldiers who live only to slaughter. As the story progresses, Kazuma is introduced to five other teenagers with similar abilities: Shiranui, Fuwa, Mizuki, Akira, and Goki. Gathered together by Princess Mio XI, they begin to realize that they all knew and fought alongside each other five hundred years ago and have since been reincarnated: a fact that makes them a target for Kuroda's mysterious master, Gessho Kuki/Shadow.