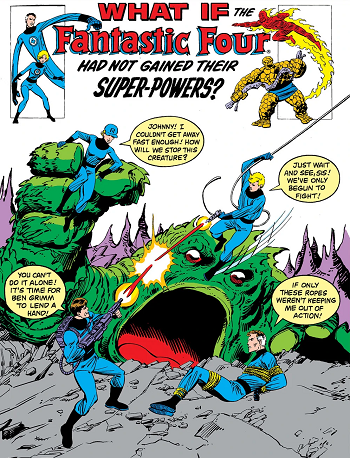 The Four may not be so Fantastic in this universe, but they can still get the job done.
Lex Luthor: What makes you think you can kill Superman when you can't even handle a mere mortal in a Halloween costume?
The Joker: There's nothing mere about that mortal!
— Superman: The Animated Series, World's Finest, Part 1
Advertisement:

In a World… with supernatural dealings or superpowers, this character is the one who is able to keep being useful through intellect, martial arts abilities, general ruthlessness, or just being Crazy-Prepared.

They notably have none of the fantastic enhancements, magic, or special powers that others do. It might even be a sore point for them, but that just makes us encourage them more. If they are in The Team, then they are usually The Leader, or at least the brains of the outfit, to compensate.

Often overlaps with Non-Powered Costumed Hero in superhero settings — to the point that that trope page was made to help people avoid confusing the two concepts.

If a Badass Normal is capable of things that should only be superhuman, then they have a Charles Atlas Superpower. If Badass runs in their family, it's because Lamarck Was Right. If they are given superpowers after being non-powered for a while, you get an Empowered Badass Normal. If they only lost powers they actually used to have, they've been Brought Down to Badass.

The Badass Normal only happens as a Muggle to be compared in a world of superpowers, fantastic elements, gods, widespread genetic engineering, tranhumanism or other artificial enhancements (like magic). Similarly, just dealing with the inhuman or strange (that's your zombies, orcs, Alien Invasion and other invocations of Puny Earthlings) doesn't suffice unless there was some other superhero who showed how they needed their powers for the same job.

Just because someone was able to kill one Super Soldier out of ten in the world does not make them a badass normal. Likewise, this is not a character who is ill equipped with outdated technology, even if their enemies are top-of-the-line. Nor do they qualify if they're undertrained while dealing with a superior trained enemy (unless said training confers superpowers/artificial enhancements that the untrained lack). By all means it should be a topic of debate with anyone they deal with (enemy, ally or even themselves) if their lack of superpowers is an issue with their usefulness.

It's important to note if they have strange or superhuman abilities, they are not normal. There is no "relatively" when it comes to Badass Normal. It doesn't matter if you can "barely" lift a tank, your ki blasts can "only" level cities, your Bio-Augmentation is standard issue, or your ability to alter the fabric of reality isn't as developed as others; you're a badass with superpowers. Not everyone can be the Batman of the setting. A character who chooses not to use their powers in combat (or has powers with no combat application) probably Fights Like a Normal.

Often overlaps with The Team Normal (if this character joins a superpowered team).

This is a Super-Trope of Badass Bystander. By definition always on level 1 in Super Weight.

Compare Muggles Do It Better, Unfazed Everyman, Weak, but Skilled, Puny Earthlings, and especially Heart Is an Awesome Power. A Hunter of Monsters frequently is one, though there are just as many Hunter of His Own Kind or Fur Against Fang variants.

Contrast with Overshadowed by Awesome, where a character is by reasonable means strong compared to regular people or even superpowerful, but can only be considered "normal" when compared to the people they hang out with, who are vastly stronger. Because of this, they often Can't Catch Up. Also contrast Super Loser, for characters who are anything but badass despite having superpowers. Brought Down to Normal arcs can show a super powered individual can be badass without their powers but that does not qualify them for this trope. This is a character type, not a plot trope.

The frogs of Wartwood prove how badass they are.

The frogs of Wartwood prove how badass they are.