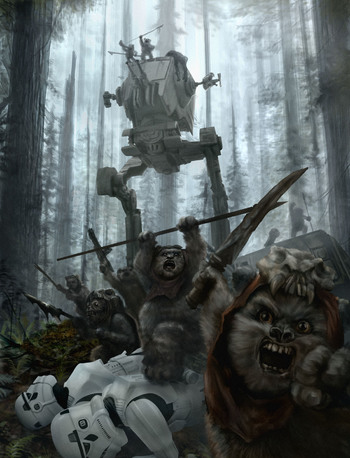 "Good ol' Rock, nothing beats that!"
"The hell of it was that a nineteenth-century bullet or even a Stone Age spear could still kill a twenty-third-century marine. It shouldn't. It should not be allowed. And that was it — it was your sense of superiority that killed you."
— Tour of the Merrimack: The Myriad
Advertisement:

A technologically advanced empire has come to conquer a poor, defenseless, primitive planet where the most advanced piece of technology is a horse. Unfortunately for the empire, Our Heroes happen to be living on the planet and helping the natives at this time, and they are anything but Medieval Morons.

As it turns out, centuries of starship-to-starship combat with particle beams and shields have rendered The Empire ignorant of the simpler ways of getting killed. Wooden crossbow bolts don't show up on radar, and go straight through magnetic barriers. Humongous Mecha fall into hidden pits and get stuck. Swinging tree trunks smash straight through Powered Armor and send the enemy soldiers flying through the air into a conveniently placed abyss. A little pluck, some old-fashioned ingenuity, and a really big rock will beat a laser every time. Don't think too hard on this one. Suffice it to say these rocks tend to de-emphasize the eliteness of the supposed crack troops in a Redshirt Army.

In short, The Empire's Achilles' Heel is anything Traveling at the Speed of Plot.

Historically, industrialized nations regularly steamrolled over the armies of pre-industrial nations or tribes. Occasionally, pre-industrial forces won battles, but rarely wars, and even then this would typically be more because the more advanced armies were badly outnumbered or poorly led, or their troops made up of press-ganged conscripts with low morale or of otherwise low quality. In the rare cases where the technological underdogs managed to preserve their independence, they generally received a crash course in development and won with at least somewhat modern weapons of their own, rather than Bamboo Technology.note Interestingly, "bamboo spear tactics" is an actual Japanese term for fighting against a technologically-superior adversary.

In certain Speculative Fiction circles, especially those revolving around The Singularity, this is called the Plucky Baseline

Compare Archaic Weapon for an Advanced Age, Cool, but Inefficient, Good Old Fisticuffs, Kinetic Weapons Are Just Better, Guns Are Worthless, Break Out the Museum Piece, Muggles Do It Better, Older Is Better and Scissors Cuts Rock. One of the things to watch for in How to Invade an Alien Planet. Contrast Low Culture, High Tech, where a low tech culture uses superior high tech devices. See also Superweapon Surprise when natives have something up their sleeves that could reasonably be expected to beat the invaders, or Insufficiently Advanced Alien when the invaders themselves really don't have anything that could reasonably be expected to beat the natives. See Schizo Tech for low tech and high tech used together. Can be justified if the primitives have a huge numerical superiority.

Incidentally, it is worth noting that, in Real Life, rock is one of the better materials to have between yourself and a laser, given its typically high melting point and lack of flammability. And a rock can make a good weapon, especially if you manage to drop it from high enough.

Ewoks vs. the Empire

Ewoks vs. the Empire