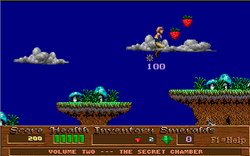 Xargon is a Platform Game developed and published by Epic Games (Then Epic Megagames) in 1993 for MS-DOS. The game consists of three episodes, the first of which was released as Share Ware. The full game was released as Freeware in 2008.

The player assumes the role of Adventurer Archaeologist Malvineous Havershim. While studying ancient ruins in Madagascar belonging to an unknown ancient culture known only as the Blue Builders, Havershim falls prey to a mysterious gas and wakes up later to find himself Trapped in Another World.

In his dreams he is greeted by a talking eagle who informs him that the land he has entered is not a friendly one, and it is ruled over by a powerful and malevolent being known as Xargon. Havershim is thus thrust unwillingly into a quest to defeat Xargon, the only way he can ever go home.