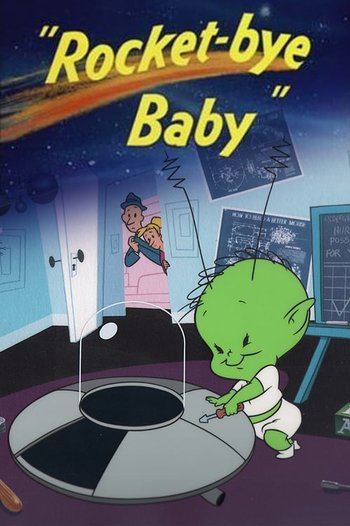 In the summer of 1954, an alignment between Earth and Mars causes a cosmic disturbance in which a human baby bound for Earth and a Martian baby bound for Mars collide and end up swapping destinations. On Earth, the expecting father, Mr. Joseph Wilbur, is shocked to find his son is green. At the behest of his wife, Martha, Joseph tries to treat the situation normal, despite the child communicating with bees and his appearance freaking people out. When the baby shows remarkable intelligence for his age, Joseph and Martha are concerned, but find it adorable when he starts building his own miniature spaceship based off a television show. Then, one night, they receive a message from Mars, and, after realizing the implications, learn of the mix-up, with the Martians promising to exchange their real baby, Yob, with the Martian baby, Mot, but warning them to protect Mot until then. However, when Mot takes off in his spaceship, Joseph has to chase after him if he is to have any hope of getting his real baby.