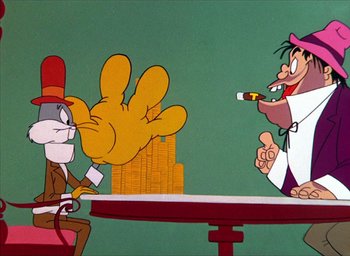 Something is going to blow up...
Advertisement:

What it took months for the ruthless gambler Nasty Canasta to build up, it takes minutes for Bugs Bunny to tear down.

That's the main synopsis of "Barbary Coast Bunny," a Chuck Jones-directed Looney Tunes short about the time the ruthless gambler and the rabbit he tried to play for a mark crossed paths.

It all begins when Bugs makes that (unstated) "Wrong Turn at Albuquerque" (on his way to San Francisco) and bumps into what turns out to be a huge gold nugget. As the bunny contains his excitement, a seedy-looking stranger — Nasty Canasta — watches from the distance and decides to steal his gold from him.

It's easier than imagined, as Bugs falls for Nasty's ruse: A simple stand (with blatantly misspelled wording to boot!) and the stranger's claim he is a banker who can safely store the gold. Immediately afterward, Bugs has second thoughts and asks for his gold back, but Nasty reveals his true colors, trapping him in a folded-up stand while he rides away with the gold. Bugs vows revenge: "You realize that this is not going to go unchallenged."

Six months later, Nasty has traveled to San Francisco, where he has opened a lucrative casino ... lucrative for him, as — to build his bank for the casino — he has bankrupted (and then some) everyone who has come to play his clearly rigged games. Bugs, who had spent the past several months plotting revenge, finds Nasty's casino on its opening night and, dressed as a hayseed hick with the persona of a naïve, backwoods country bumpkin decides he wants to play. He first "confuses" a slot machine for a "telle-o-phone," but — under the ruse that he is phoning his mother for money — immediately hits the jackpot much to Canasta's shock.

Nasty spends the rest of the film trying to recoup his losses and one-up Bugs ...:

Nasty, realizing his months of work at literally stealing all the money from the locals was undone in mere minutes, tries to rob Bugs at gunpoint with one more game ... Russian roulette, under the pretense that it is a game of chance. Bugs, remaining in character, naïvely spins the revolver bullet cylinder like a slot machine ... and a mass of coins inexplicably pours out the gun's barrel!

Now with the rabbit's revenge complete, Nasty tries to figure out what went amiss and see if he can get lucky ... but accidentally shoots himself in the face and keels over stunned. Bugs delivers the final line to the audience (in his normal voice): "Da moral of dis story is: 'Don't try to steal no 18 karats [carrots] from no rabbit.'"

Tropes associated with this cartoon