Sold His Soul for a Donut 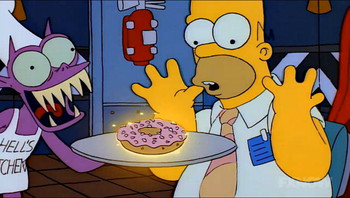 A donut to die for.
Selling one's soul to the Devil is an old plot. Usually, characters sell it for something extraordinary — life, power, riches — only to be blindsided by the other party when they least expect it. But sometimes, someone gets scammed into selling or willingly sells their soul for essentially nothing.

This is usually a comedy trope.

Sub-Trope of Deal with the Devil. Compare Mundane Wish and Wasteful Wishing, when a character who can wish for anything and get it requests something incredibly ordinary, Comically Small Bribe, when a character offers an incredibly small payment for a service, and Comically Small Demand, when someone with authority or power over others uses it to achieve something minor or mundane.