Film / The Cat in the Hat 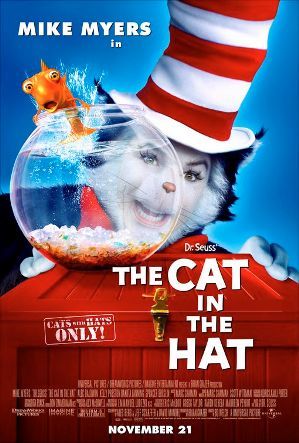 "Let's get this party started!"
"Why, I'm the Cat in the Hat!
There's no doubt about that!
I'm a super fundiferous feline,
Who's here to make sure that you're...
(Beat)
'Meline'...'key lime'...'turpentine?' I got nothing. I'm not so good with the rhyming, not really, no."
— The Cat introduces himself to the kids.

The Cat in the Hat is a 2003 film adaptation to the book of the same name, with the titular character portrayed by Mike Myers. In this version, the kids Conrad (Spencer Breslin) and Sally (Dakota Fanning) are helping their mother, Joan (Kelly Preston), get ready for a party thrown for her office in hopes of impressing her employer, though Conrad is presented to be something of a trouble maker and seemed to be at odds with Joan. Not helping the familial situation is a sleazy neighbor, Lawrence Quinn (Alec Baldwin), who is doting on Joan and trying to convince her to send Conrad off to military school while he tries to gain an easy life.

When Joan soon sets off for work, leaving the kids with nothing to do until the titular Cat shows up to bring them some fun. But things get quickly escalate out of hand, especially when the Cat pulls out his crate and tells Conrad never to open it. Naturally Conrad doesn't listen and things go From Bad to Worse as Quinn soon gets involved and Conrad, Sally and Cat have to fix up the mess before their mother gets home.