Western Animation / The Cat in the Hat 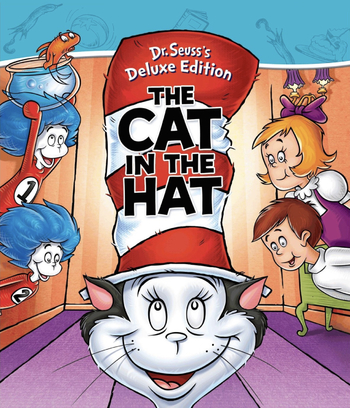 "Whoever heard of a six-foot cat!?"
— Mr. Krinklebine

The Cat in the Hat is a DePatie-Freleng 1971 animated adaptation of the famed Dr. Seuss book of the same name. It was the first Dr. Seuss special not to be directed by Chuck Jones, whose studio shut down during its production (Jones is still credited for storyboarding). It stars Allan Sherman as the titular Cat.

The special, written by Seuss himself, expands upon and drastically changes the storyline from a Random Events Plot to the Cat enlisting the help of two children to help him find his missing "Moss-Covered Three-Handled Family Gradunza." As with the book, the children join in the cat's chaos at the behest of their finicky fish here named Carlos K. Krinklebine (voiced by Daws Butler), and the cat cleans up on his way out before their mother comes home to find them out.

This version of the Cat appeared in two other Seuss specials, Dr Seuss On the Loose (where he introduced adaptations of The Sneetches, The Zax, and Green Eggs and Ham) and The Grinch Grinches The Cat In The Hat (in which the Cat matches wits with Seuss's second most popular character).

The animation provides examples of: