Ride / The Cat in the Hat 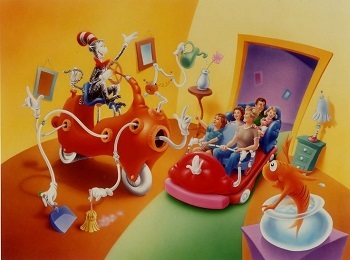 The Cat in the Hat is a dark ride located in the Seuss Landing area at Universal's Islands of Adventure.

Unlike most of Universal's attractions, the ride is a straightforward retelling of the book of the same name. Guest board couch-shaped vehicles and are taken through the house of the book's protagonists as all the chaos unfolds when the Cat appears and unleashes Thing 1 and Thing 2 on the home. The ride only adds in a few minor extra sequences into the story to help make it more adaptable for the theme park setting.

The attraction was among the park's opening day attractions on May 28, 1999; being one of the most heavily advertised aspects of it at the time.

Tropes shown in The Cat in the Hat ride include: