Western Animation / The Grinch Grinches the Cat in the Hat 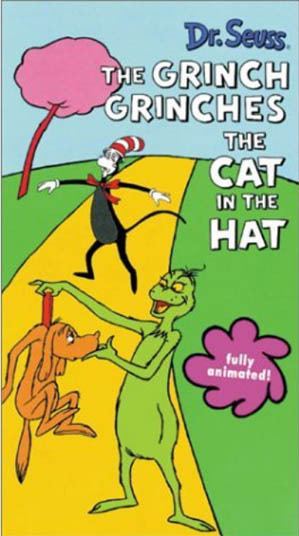 What happens when Dr. Seuss' two most popular characters square off against one another? The answer appears in this 1982 animated television special, The Grinch Grinches The Cat in the Hat (aka The Cat in the Hat Gets Grinched).
Advertisement:

Things start out on a typical day in the lives of the two title characters. The Grinch, under orders from his own reflection in the mirror, is out making people's lives miserable when he suddenly crosses paths with the Cat in the Hat, who is out trying to have a picnic. The Cat unwittingly incurs the wrath of the Grinch, who then proceeds to make the Cat's day miserable by building devices with which to warp the sounds of the Cat's voice, and those of other animals, and darken the Cat's surroundings. The Cat grows upset with the Grinch's hijinks and tries to figure out how to put a stop to it all.

This was the final Dr. Seuss television special to be produced by De Patie Freleng Enterprises, shortly before they became Marvel Productions Ltd., and the second to last produced during Seuss' lifetime.