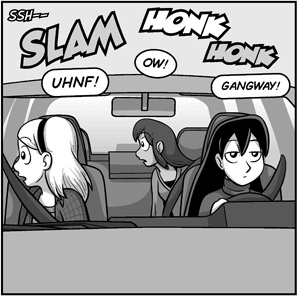 In film comedy, most major collisions/accidents are expressed through a loud crashing noise offscreen, usually accompanied by a cringing reaction shot. These crashes are Stock Sound Effects which tend to sound like a mixture of breaking glass, breaking crockery, and rattling metal objects - although in a lot of animated shows, particularly Hanna-Barbera cartoons, it sounds more like a bass drum/cymbal crash. In animated shows, the collision is often emphasised by having the screen shake rapidly up and down. And whatever else happens, That Poor Cat always seems to get the worst of it.

Frequently preceded by the words "Look out for the" or "Be careful with the", e.g., "Look out for the—" CRASH! "...china hutch." Frequently followed by a piece of debris wandering onscreen, such as a hubcap rolling lazily into frame and spinning to a stop.

Used because it's funny, sound effects are cheap, and no writer could come up with a more chaotic scene than your imagination can. May involve a Sound-Only Death or an "I Can't Look!" Gesture or a quip of "That's Gotta Hurt".