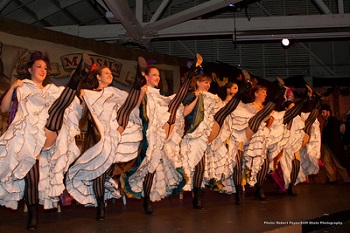 Officially, it's the "Infernal Galop

" from Act II, Scene 2 of Jacques Offenbach's 1858 operetta Orpheus in the Underworld.

To the rest of the world, it's simply "the cancan song." And it's usually (although not always) a cue for high-kicking Chorus Girls to hit the stage. To that end, it's a quintessential part of the Public Domain Soundtrack and Standard Snippet tropes.

Because of its high-energy, feel-good nature, its use as a trope falls under one of the following conditions:

Remember: not all performances of the cancan (dance) are set to the Cancan Song, and not all appearances of the song signal a performance of the dance.