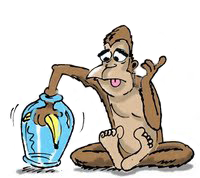 "You just had to buy the unbreakable plastic kind, didn't you, Dog?"
— Cat, from CatDog, after ending up in this situation
Advertisement:

A Comedy trope in which someone reaches their hand into a container to grab something, often but not always food, but their hand gets stuck because of the way that they're gripping it. This trope can come with An Aesop about greediness if the character is unable to get their hand out of the container because they're holding too much of it and are refusing to let go, or about thinking rationally with the situation at hand (pun very much intended) if they'd be able to remove their hand with the item simply by holding the item in a different way. Can result from a Tempting Cookie Jar.

Compare Hand in the Hole, which this trope is similar in concept to where it is also a form of Schmuck Bait, but it differs in that for a clutching hand trap, the victim reaches in on their own whims since they know what's inside and want to get it, whereas Hand in the Hole is when the victim is being an idiot and putting their hand inside with no idea of what's in there in the first place.