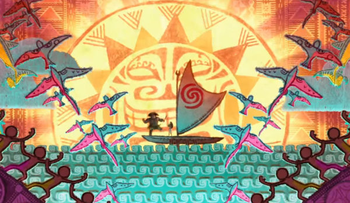 When you wish upon a star, your fever dreams come true.
Advertisement:

The musical number in an animated musical in which the animation stops pretending to depict things that are actually happening in the world of the film and becomes a more abstract illustration of the music. This is usually a whacked-out moment of lighting and choreography, sometimes caused by hallucinations. If it is caused by a dream, see Dream Ballet. If it is caused by substance use, see Mushroom Samba. The Disney Acid Sequence is not as common as it first seems — moments only fit this trope if they are not explainable in-universe. It shares some characteristics with the Big-Lipped Alligator Moment, in that it frequently has nothing to do to with the plot and the characters never mention it again, but a Big-Lipped Alligator Moment, no matter how bizarre and random, is still assumed to have actually taken place in the film's physical reality.

The Disney Acid Sequence can be used to good comedic effect in films which break the Fourth Wall. In general though, if the switch is too pronounced, be prepared for some genuine Nightmare Fuel.

Named for the most prolific offender and trendsetter, although the phenomenon is not limited to the Disney Animated Canon. It's not even necessarily limited to animated musicals; live-action musicals can also contain one if a musical number goes more surreal than just a random song and dance routine. Some examples here are likely to be inspired by Busby Berkeley Numbers. All examples here are prone to contain Deranged Animation.

Sub-Trope of What Do You Mean, It Wasn't Made on Drugs?. For trippy music videos that are not part of a larger and less surreal work, see Surreal Music Video. For an alternate take on musical scenes set to incredible visual spectacle, see Busby Berkeley Number. Compare Drunken Montage.