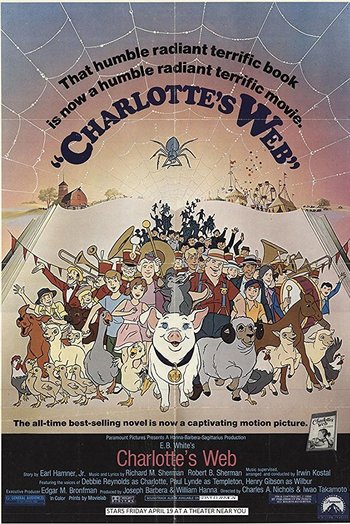 "Sometimes when somebody loves you,
Miracles somehow appear.
And there in the warp and the woof
Is the proof of it,
Charlotte's Web!"
Advertisement:

The children's book Charlotte's Web by E. B. White was first adapted as an animated film in 1973. It was produced by Hanna-Barbera and Sagittarius Productions, and released by Paramount. Its screenplay was written by Earl Hamner, Jr. (The Waltons) and music by The Sherman Brothers (The Many Adventures of Winnie the Pooh, Mary Poppins), and it featured the voices of Debbie Reynolds as Charlotte, Paul Lynde as Templeton, and Henry Gibson as Wilbur. The film was reasonably well-reviewed by critics (74% fresh on Rotten Tomatoes), though endured some complaints regarding the quality of the animation and the music. Notably, E.B. White himself was disappointed by the film. This did not stop it from becoming a popular success, enjoying strong popularity on VHS and television.

A Direct to Video sequel titled Charlotte's Web 2: Wilbur's Great Adventure was released in 2003 by Paramount and Universal, with animation production handled by the latter.

Some tropes weaved into this Charlotte's Web

Wilbur discovers he's going to be slaughtered and turned into Christmas dinner.

Example of:
Your Days Are Numbered

Wilbur discovers he's going to be slaughtered and turned into Christmas dinner.