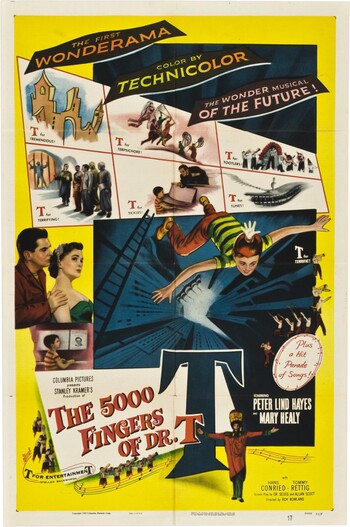 "Yes sir, very atomic!"
"We should always believe children. We should even believe their lies."
— Mr. Zabladowski
Advertisement:

A sadly-overlooked 1953 fantasy movie, directed by Roy Rowland and produced by Stanley Kramer, The 5000 Fingers of Dr. T was Dr. Seuss's lone attempt to break into Hollywood screenwriting.

In it, young Bartholomew Collins (Tommy Rettig) finds himself and his hypnotized mother (Mary Healy) trapped in the piano-playing Institute of the maniacal Dr. Terwilliker (Hans Conried), a villain who doesn't just chew Seuss's marvelous scenery, but engages in an epic multicourse banquet. Bartholomew's only hope is convincing plumber August Zabladowski (Peter Lind Hayes) to help him, instead of installing the Institute's sinks. There's also Siamese-beard rollerskaters, a visit to the most toe-tappingly tuneful dungeon ever, and a VERY atomic noise-sucker/bomb, which isn't something you can say about most other movies.

The film was a massive Box Office Bomb and critical bust at the time of its original release, with people walking out of its own Hollywood premiere after 15 minutes, and Dr. Seuss never troubled Hollywood again for the rest of his life. It's since picked up a small cult following, with both Tim Burton and Joe Dante citing it as a major influence.

This film contains these INEXPLICABLE PHENOMENA: