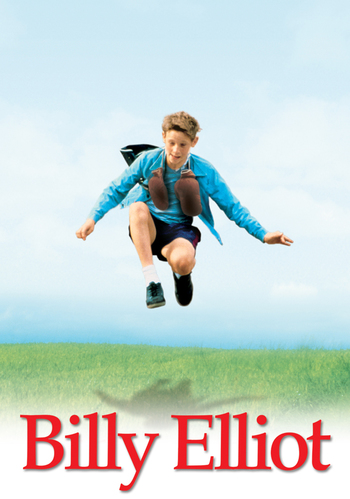 Billy Elliot is the story of an eleven-year-old boy who escapes the harshness of his existence by discovering his passion for ballet. Inspired by A. J. Cronin's novel The Stars Look Down and directed by Stephen Daldry, this 2000 film spawned a highly successful West End musical, a collaboration between the film's original screenwriter Lee Hall and Elton John. Billy Elliot is both a gritty historical drama and a heart-warming feelgood movie.

The movie is set during the UK Miners Strike of 1984. Surrounded by the harsh realities of his family's poverty, Billy's only escape is the love of music he inherited from his late mother. His father pushes Billy into manly pursuits, forcing him to take up boxing at the local gym. At the same gym is a Ballet class that attracts Billy. He secretly switches from boxing to ballet.

Described by some as "a Coming-Out Story without the gay", this film was a major example of the "Gender-Normative Parent" Plot, where young boys in a coming-of-age story learn an important lesson — Be Yourself... even if it does involve leotards.