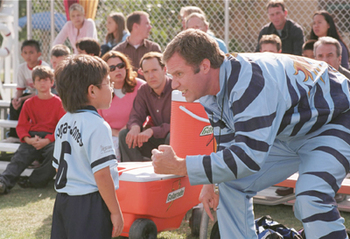 The "Sports Dad" is a father who pressures his children to succeed in sports or other physical (or "manly" if he has sons) activities. While parents of this archetype are usually male, coach/sports moms do exist.

There are also more extreme versions of the trope who pressure their sons into fighting or hunting. Considering how scarring it might be to be pressured into fighting or killing, these dads can be viewed as abusive. Woe be unto any Nerd who has a father like this, especially if the dad wants him to fight his bullies. See Jock Dad, Nerd Son.

Related to Education Mama, for a parent that pushes their child at academics and Stage Mom for one that does the same with acting, singing, and other performance arts. See also "Gender-Normative Parent" Plot for when people around a boy (usually the father) wants him to do a sport or something considered "masculine" while the boy wants to pursue something that's stereotyped as being feminine.