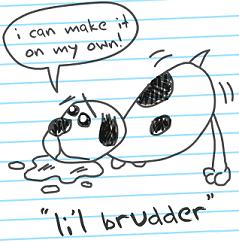 "I'm gonna be a quarterback when I grow up! I'm gonna throw for 2,000 yards!"
"You tried to fight in World War I but couldn't do that.
The British army wouldn't let you join 'cause you were too fat.
Look it up, it's a true fact — Wikipedia that!"
— Quentin Tarantino to Alfred Hitchcock, Epic Rap Battles of History
Advertisement:

The stock drama in which someone's aspirations are impossible because of a physical defect. Used for comedy and dark comedy just as much as it is for drama. This is often a crucial turning point in a story, so be warned that there are spoilers below.

Related to I Coulda Been a Contender!. Subversions and aversions can lead to a Handicapped Badass. Inversions can be Inspirationally Disadvantaged or have a Disability Superpower. If the character gains the defect during their life, then it's a Career-Ending Injury. If they're too much of a Determinator to let their handicap stop them, they may become a Deaf Composer or Ironically Disabled Artist.

Sister Trope to Tragic Dream, where the aspiration is impossible due to any of a number of things.

Not to Be Confused with All of the Other Reindeer.

Alternative Title(s): Sorry Billy But You Just Dont Have Legs