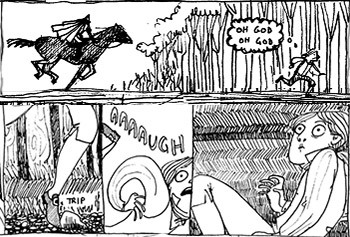 "I will obtain skill in the use of my legs and feet, so that I can actually run from one place to another without tripping over every shadow, crack, and pebble along my path."
— No. 8 of The True Love List

We've all seen it happen. Two or more people are running from something that promises pain and/or death. While they're running, one of the characters trips. For some strange reason, they're almost always incapable of getting up on their own, even if there's no logical reason they shouldn't be able to. The other characters then have to decide whether or not to stop running and go back for them. This can either lead to No Man Left Behind or Screw This, I'm Outta Here! from a Dirty Coward.

See also: Go On Without Me.

Contrast: Broken Heel and Twisted Ankle. Help, I'm Stuck! is a similar situation where the character is physically caught on/in something and cannot get free without help at all.

For the worst possible outcome, see Death by Falling Over.

Here is a compilation of "I've Fallen and I Can't Get Up!"

Alternative Title(s): Ive Fallen And I Cant Get Up