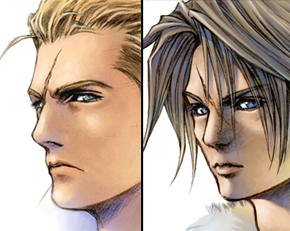 Dual duel scars!
"Give it up, Me-mow! You're only making my face look cooler!"
— Finn, Adventure Time
Advertisement:

Originally a Dueling Scar was a scar on the face, usually on the left cheek, resulting from being cut by a sword in a duel. They're part of the stock uniform for a sinister Nazi or obsessive, pickelhaube-wearing Prussian and have become a fairly common accessory for any sinister military man regardless of origin.

—which is still practiced—mostly in the university towns of Germany, but also in Austria, Switzerland, Estonia, Latvia, Poland, and Flanders. In Germany, the weapon is known as a schlaeger, also known as the "soup-plate of honour" due to the large size of the hand guard.

In one of these bouts (called a Mensur), two students stand a fixed distance from one another wearing armor that covers everything but their cheeks, forehead, and lips and attempt to slash at the exposed skin of their opponent. There are no points, you lose by flinching or dodging and win by getting sliced in the face. The scar that results is the goal of this practice, the bigger the better! Students would even go so far as to badly sew the edges together or even sew horsehairs into the wound to ensure a big, visible scar. The resulting scar is a Schmiss or Dueling Scar. Until World War II this was seen locally as a Good Scar as it showed that the wearer was educated and brave. In modern practice, these scars are seen more as a sign of poor performance than a sign of manliness, as the goal of a Mensur is to parry each incoming hit, and more often than not, a bout ends after a certain number of rounds without anyone having incurred a scar.

If that's all there was to it this wouldn't be a trope, it would be mentioned in Useful Notes—Germany and that would be the last of it. However, a number of Nazi officers had dueling scars and after the war, no serious villainous movie Nazi — especially a Nazi Nobleman — would be seen without one.note Although in point of fact, the Nazis didn't really approve of Mensur duels and the practice was officially discouraged under the Third Reich. From there the dueling scar became a standard adornment any time casting wanted a quick way to tell the audience that this character was a military man and serious about it, even if the character was not from a country that practiced academic fencing, even if they weren't from Earth at all.

To qualify for this trope, the scar needs to be on the face and used to make a character look more militarized and badass. The scar need not necessarily be from a sword or an actual duel, although writers should get extra credit if they know the origin of the trope.