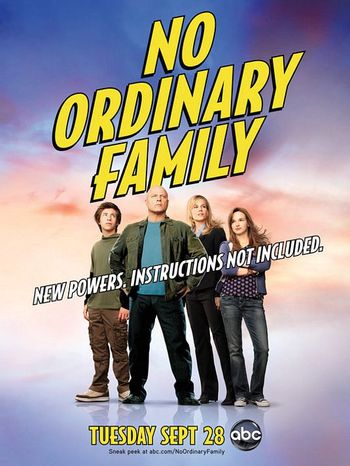 Some might call them incredible or simply heroic.
An ABC TV series which aired for one season from September 2010 to April 2011.
Advertisement:

The Powells are just an average suburban family, until father Jim decides they're long overdue for a family vacation and takes his wife Stephanie and their children Daphne and JJ to Brazil. On the way, a storm comes out of nowhere and their plane crashes into a river, where all four are bathed in strange luminescent water before making their way back to civilization.

Upon returning home, the family discovers that they have all been given (or developed) superpowers: Nigh-Invulnerability, Super Strength, and super jumping for Jim, Super Speed for Stephanie, Telepathy for Daphne, and Super Intelligence for JJ. Now the question becomes, what do they do with them?

So far, Jim has used his powers to secretly fight crime (he normally works as a police sketch artist), Stephanie to get from work to home faster so she can spend more time with her family, Daphne tried to ignore hers but can't help hearing people's thoughts around her, and JJ tries to impress people with his. Stephanie has also been using her job as a scientist to investigate the origins of their powers.

Has a Recap page and a Characters page.