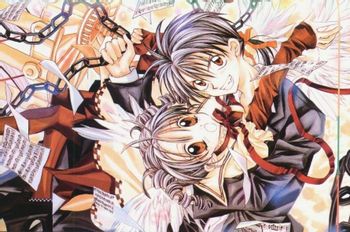 "Some day you'll understand...why the song that lingers...binds us together..."
Advertisement:

Full Moon (a.k.a. Full Moon o Sagashite; trans: "Looking for the Full Moon") is a seven-volume Shōjo manga series by Arina Tanemura (later adapted into an anime, which enjoyed high ratings in Japan). The manga ran in Ribon from 2002 to 2004.

Mitsuki Koyama is a 12-year-old girl who dreams of one day becoming a famous Idol Singer so that she can be reunited with her childhood love, Eichi. Unfortunately, she has a malignant tumour in her throat and without surgery, which would cause her to lose her voice forever, she only has one year left to live.

Late one night, she is visited by two friendly Grim Reapers from the Paediatrics Division of Heaven. In exchange for Mitsuki going quietly when her time is up, they take pity on her and give her the power to transform into "Full Moon", a beautiful sixteen-year-old version of Mitsuki with no throat tumour.

Against all odds, "Full Moon" manages to pass the audition Mitsuki desperately wished to attend, setting her on the road to achieving her dream. Now she has to work hard to manage her newfound double-life while keeping it a secret from the discerning eyes of her strict grandmother, and dealing with the lingering presence of the Grim Reapers.

The manga and anime are available in North America via Viz Media. The DVD releases were halted due to poor sales, only going as far as episode 28. However, all 52 episodes are available on Hulunote However, they are based on Viz Media's DVD masters. Additionally, the episodes are subtitled only.

For tropes specifically related to the anime, please refer to its page.