Did They or Didn't They? 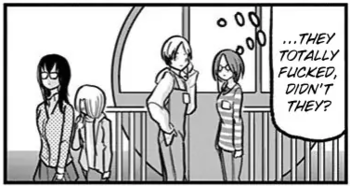 They didn't, but they definitely did something inappropriate for a Ferris Wheel Date Moment
Mr. Randall: Sally, do you want to go back to my apartment?
Sally: Ohhh, I know what's gonna happen there, uh-huh! We'll continue to kiss and touch, and kiss and touch, just like the movies — then all of a sudden the scene ends and we're in the park, eating hot dogs and laughing.
— 3rd Rock from the Sun
Advertisement:

Bob and Alice are presumed to have Done The Deed note read: had sex... except we (the viewer) don't really know for sure if they did. This is usually portrayed in one of these ways.

A favored trope of Sit Coms — especially those that follow the Three's Company template. Often exacerbated by a Shrug of God. Compare Innocent Innuendo — where the answer is a short, but sweet "They didn't". Contrast Fake-Out Make-Out — where they did (sort of), but didn't really "mean it".

See also What Did I Do Last Night? and Bedmate Reveal. Usually follows Will They or Won't They?. Can be a set-up for a Secret Relationship reveal.

Not to be confused with Did You Just Have Sex?.

Based on her body language and facial expressions, Kris has seen Bob completely naked.

Based on her body language and facial expressions, Kris has seen Bob completely naked.