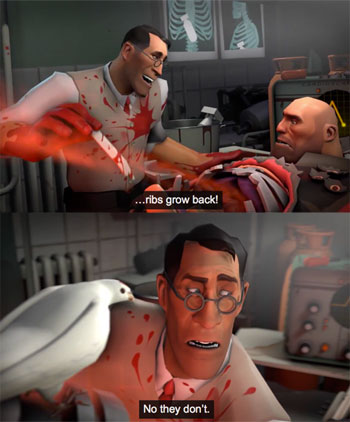 Actually, they do.
"Dear rich Dora Stanpipe, How I love her!... father's money."
— Dan Backslide, The Dover Boys
Advertisement:

This trope is when a character says something to another character but then will immediately whisper or silently mouth the opposite sentiment, but done so in a way that the other character doesn't hear/see. This might be done because they don't want to hurt the person's feelings; they'll tell a white lie but then immediately reveal their true feelings in an aside to a different character. This might also be done purely to deceive, such as a villain agreeing to a hero's demands but then quietly ordering his mooks to attack the hero when his back is turned.

A generic example with, say, Bob and Alice, will have Alice asking Bob if he likes a particularly gaudy outfit. Bob doesn't want to hurt Alice's feelings, so he'll tell her, "Oh, yes! Love it!". However, as soon as she turns away, he'll look over at his friend Charlie and shake his head while mouthing, "Noooo..." An alternate example might be Alice asking Bob if he wants to go shopping. Bob, not wanting to anger her, will exuberantly say, "Sure! I'd love to!" As Alice turns away, Bob then desperately whispers, "Help me!" to passersby.

A work or character fond of Breaking the Fourth Wall may direct this remark straight to the audience.

See also Hypocritical Humor, for the more comedic use of this trope. For the more dramatic use, compare False Reassurance and I Lied. Also see I've Heard of That — What Is It?. Compare *Cough* Snark *Cough* for a more blatant way to simultaneously express and obscure a statement. Not to be confused with literally being Two-Faced.