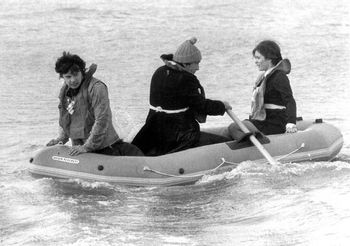 They're on a boat.note No, a dinghy.
Why can't we go anywhere pleasant? Where there's no fighting, just peace and happiness?
— Victoria never did get it
Advertisement:

The one with a sonic screwdriver. Bet you that's not gonna show up again anytime soon.

Written by Victor Pemberton. This six-episode serial first aired from March 16 to April 20, 1968.

The TARDIS lands on the surface of the sea and the travellers use a rubber dinghy to get ashore, where they are promptly shot by tranquiliser darts and taken prisoner.

They have arrived in a restricted area, a natural gas refinery, and there have been a series of problems in the pipes. One of the engineers insists that a rhythmic beating sound heard in the pipes must be a living creature.

It turns out that a creature of living weed has made its way into the pipes and can secrete either a gas or a foam that enables it to control the minds of anyone who comes into contact with it. It seems intent on establishing a colony based on the refinery.

The Doctor discovers that the weed is repelled by high-pitched noises when Victoria's screaming drives it away and he uses a recording of the screaming to defeat the weed creature.

Victoria, having had enough of the dangers of travelling with the Doctor, decides to stay with the family of one of the workers, Harris. Jamie is sad to see her go, but the Doctor understands.

"Fury from the Deep" is the only Second Doctor serial to not begin with the word "the" (even the three multi-Doctor specials that the Second Doctor co-starred in followed the tradition). It's also the debut of the Sonic Screwdriver, which would become the Doctor's signature do-anything gadget during the 1970s. Here, it's used to... unscrew some screws.

This was also the first serial to use 16mm film for location shooting, superseding prior 35mm equipment; as 16mm is a much smaller gauge than 35mm, the equipment for it was much smaller and thus more practical to use for extensive periods of time. 16mm would remain in use all the way until the last four seasons of the Classic Series, when the show went all-videotape due to a mix of budget cuts, problems with location filming for "The Two Doctors", and the rise of more convenient professional camcorders. That said, the Beeb didn't completely abandon 35mm after adopting 16mm equipment: it would still be utilized for occasional effects shots before the switch to fully-videotaped stories, and the 1996 TV movie, following American production standards, would be shot entirely on 35mm film (though it was edited on videotape due to the extensive use of CGI). Episode Two of "The Space Pirates" was also inexplicably shot entirely on 35mm, which led the BBC to preserve it for historical purposes.

"Fury" is the last serial to be missing in its entirety. An animated reconstruction was released in 2020, providing the viewer with two different options: a colour 16:9 presentation of all six episodes, and a black-and-white 4:3 presentation.