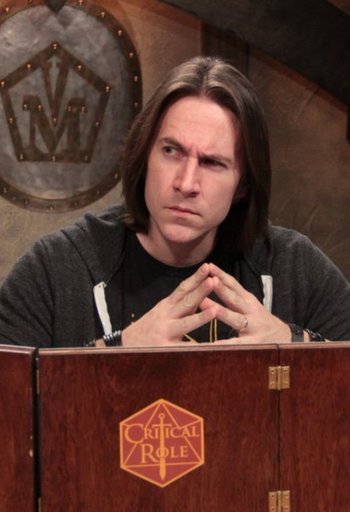 How do you want to do this?
Advertisement:

Matthew Christopher Miller (June 29, 1982), better known by his stage name Matthew Mercer, is an American voice actor. Born in Florida, he started off providing background voices in anime dubbing in the early 2000s. He eventually found more prominence in Japanese video game dubs and some western animation voice roles, though around 2012/2013, he eventually started gaining more prominent roles in anime voiceover work. In 2010, he directed and starred in the live-action web original series There Will Be Brawl, which also featured friends and other voice actors such as Kyle Hebert.

Alongside There Will Be Brawl, Matthew is known for voicing Chrom in Fire Emblem Awakening, Levi in Attack on Titan and Jotaro Kujo in JoJo's Bizarre Adventure.

However, his most well-known current role is working as the DM for Critical Role, where he and other nerdy ass voice actors sit around and play Dungeons & Dragons. This has become so successful, he also was called on to DM the Nerdist campaign Force Grey: Giant Hunters. Oh, and he was also DM for a game featuring Pewdiepie and CinnamonToastKen. Plus, he got to DM a one-shot for Vin Diesel in a Critical Role spin-off to promote The Last Witch Hunter. And then on August 6, 2016, Matt got to announce that his custom campaign setting was being made into a book that contained information on how to run games in his custom setting. In case you hadn't figured it out, he really likes D&D (if you're wondering, his personal favorite character that he likes to play is a Dwarf Bard). For Red Nose Day 2019, he fulfilled a long-term goal of his by being Dungeon Master for Stephen Colbert, in a one-on-one session with content voted on by fans through donations.

I'll show you justice, with my ROLES:

Anything can change!
Feedback

Reyes, the commander of Blackwatch, opts for extrajudicial execution, to Cassidy's horror.

Reyes, the commander of Blackwatch, opts for extrajudicial execution, to Cassidy's horror.