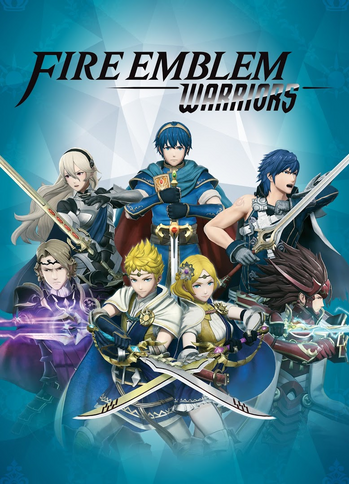 Heroes from across the Fire Emblem universe collide.
Advertisement:

Once, a Divine Dragon blessed the world and its people, but without warning a powerful evil Dragon named Velezark appeared and waged war against the people and the Divine Dragon. To defeat Velezark, the Divine Dragon created the Shield of Flame and with it, the people sealed Velezark away and brought peace to the world. Many years later, there exist two kingdoms, the small kingdom of Aytolis, and the larger kingdom Gristonne. Without warning the king of Gristonne invades Aytolis and tries to steal the Shield of Flame, forcing the queen of Aytolis to send her two children, the twin prince and princess Rowan and Lianna, to safety with it to prevent the revival of Velezark. Without allies beyond the prince of Gristonne Darios, the twins must set up on a quest to awaken the power of the Shield of Flame and save their home. Along the way, the duo are aided by heroes from the many Fire Emblem games, all of whom are pulled into the world of Warriors as well.

Fire Emblem Warriors features characters from Shadow Dragon and the Blade of Light, Gaiden and its remake, Shadows of Valentia, The Blazing Blade, Awakening, and Fates.

Fire Emblem Warriors is compatible with amiibo from the Fire Emblem and Super Smash Bros. lines. Up to five times a day, you can scan a figure to gain a random material or weapon. The Chrom and Tiki amiibo (launched alongside the game) also grant exclusive equipment.

Fire Emblem Warriors was released on Nintendo Switch and New Nintendo 3DS on September 28, 2017 in Japan and October 20th in western countries. Three DLC packs have been released, each one titled after one of the three main represented games and all three include new characters, History modes, and costumes.