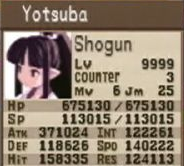 The Final Boss can be beaten at level 90.
Q: What is the maximum level?
A: Uh...something really really high. I was hoping by the time anyone reaches that point they would have decided that they've sufficiently beaten the game.
— FAQ for RPG Shooter: Starwish
Advertisement:

In many games with Character Levels, you'll probably won't need to reach the highest level possible in order to beat the game. Maybe this is just because of scaling and pacing of experience, or the game simply isn't long enough for you to naturally reach the maximum level. But sometimes, the highest possible level is so far beyond what's needed to beat the game that it would take hours upon hours of work just to reach it. When this happens, the game has an Absurdly High Level Cap.

This can make a player wonder why the developers bothered to make such a pointlessly out-of-reach level Cap. Sometimes, the bonuses or perks for leveling up past what's necessary to reach the end of the game start to become less effective. This results in a high level number that really isn't much different from lower levels. Other times, the perks get so incredible that reaching the maximum level allows a player to breeze through the game and remove all challenge. In this situation, reaching the cap just feels like overkill. (Then again, There Is No Kill Like Overkill.)

The common "endgame level" tends to be around the "halfway mark", usually. In some games, this is actually where your stats begin to max out anyway.

Note that this is not just about games with really big numbers as the level cap, but for games where you won't get anywhere near the cap without absurd amounts of Level Grinding; a level cap of 999 wouldn't count if you can be reasonably expected to be at least level 950 by the time you reach the endgame. A level cap of 999 when you are expected to reach that level at the middle of the game would instead count as its opposite trope, Absurdly Low Level Cap. Conversely, a level cap of simply 30 would be absurdly-high if you only need to be level 10 to beat the game.

Note that Tropes Are Tools. This can be a useful gameplay feature for games with very open-ended and sandbox-like gameplay:

Hilariously-enough, before Shadowlands dropped us all back down to level 60, we could reach twice that number at level 120.

Hilariously-enough, before Shadowlands dropped us all back down to level 60, we could reach twice that number at level 120.