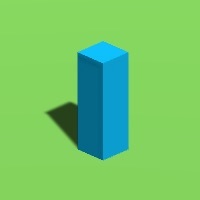 The tower itself.
Advertisement:

The Perfect Tower is a video game created by Fire Sword Studios for computers made in Unity in 2016. It's a mashup of two genres: Idle Game and Tower Defense. You control and upgrade a tower which shoots at enemy cubes. While simplistic at first, the game quickly opens up many interesting mechanics to help the player, such as a factory to produce resources, a workshop that modifies the tower's starting upgrades, a laboratory that unlocks permanent research upgrades, headquarters that unlock special ultimate upgrades for the tower, and the temple that has immensely powerful end-game stuff.

The game is available on Kongregate here

. A sequel is in closed alpha, and it will be on computers and mobile devices.