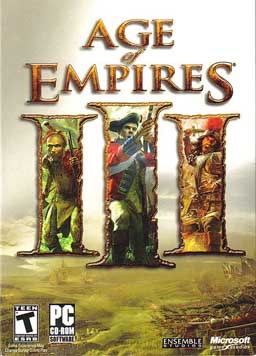 Age of Empires III is the fourth installment (counting the Spin-Off series Age of Mythology as another series) in the Age of Empires franchise. It was released in October of 2005, and is set during the colonization of the New World, with seven European civilizations (Spanish, British, French, Portuguese, Dutch, Russian and German) and the Ottoman Empire as playable civilizations. There's also a version for the N-Gage phone made by Giu Mobile in 2009.

While the gameplay remains similar to previous entries in the series, several new features were introduced here. For instance, the Home City feature allows shipments of troops, technology or resources to be delivered during normal gameplay. In order to be able to send shipments, the player must gain experience points which are obtained during normal gameplay. The ability to ally with native tribes was also added, with the opportunity to train units from said tribes to add to your military forces. Also, unlike in previous games, the civilizations are far more varied, with more unique units, technologies and bonuses, along with several completely unique Home City shipments. And, akin to Mythology's Age advancement system, the player must choose a Politician, who provides special bonuses, in order to advance to another Age.

The game features a single-player campaign made of three acts (Blood, Ice and Steel), which follows the story of the Black family over 3 centuries as they battle against the Circle of Ossus and take part in several historical events, with the Fountain of Youth as a key plot point across the three acts. The acts are narrated by Amelia Black, the protagonist of Steel.

The first expansion pack, Age of Empires III: The WarChiefs, was released in 2006 and featured three of the native civilizations of the first game as playable: the Aztecs, the Sioux and the Iroquois. It also had several other additions, such as new buildings (the Saloon and the Native Embassy), units (gunpowder cavalry, petards and spies), and the chance to advance to an alternative fifth era for the European civilizations through a Revolution against the mother country. The three new civilizations also had unique twists, such as the firepit (where villagers can dance in order to obtain a bonus, like creating healing priests, gaining more experience and raising the population limit) and unique big buttons for many buildings.

The single-player campaign, this time composed of two acts, (Fire and Shadow) extended the Black family's lore by focusing on Amelia's father and son respectively, with Amelia starring again as the narrator and providing a cameo appearance in Shadow.

Age of Empires III: The Asian Dynasties, the second Expansion Pack, was developed this time by Big Huge Games and Ensemble Studios, and was released in 2007. This Expansion Pack added another three new civilizations to the game, this time from the Far East (Imperial China, Japan and India). It introduced new unique bonuses for these civilizations, like the Export resource and the Consulate, a building where Asian players can buy European armies and technologies. This time, the single-player campaign is set in three different historical events: the unification of Japan, the Chinese Treasure Voyages and the Sepoy Mutiny in India.

After the demise of Ensemble Studios, Robot Entertainment (a development house made of former Ensemble employees) is developing the updates and maintaining the ESO service.

An Updated Re-release called Age of Empires III: Definitive Edition was released on October 15, 2020. It comprises the base game and its two expansion packs, and features two new playable civilizations (the Swedes and Incas), Historical Battles that cover the time period of the game, and an "Art of War" gamemode with a series of challenges designed to help newer players get into competitive gaming. In addition, some civilizations (particularly Native American civilizations) were reworked in order to be more historically accurate with their real life counterparts, and the European civilizations have new age-up options.

The game has a character sheet in need of some wiki magic love.

Age of Empires III, its expansion packs, and its re-releases show examples of: