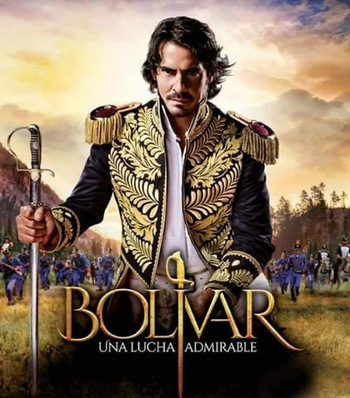 Also known as "Every Venezuelan actor except Edgar Ramírez: The Series"
"Bolívar" is a Colombian series, based on the life of Simón Bolívar. It has 60 episodes, and goes from his childhood to the Spanish American Wars of Independence.
Advertisement:

Bolívar was born at a wealthy "hacienda" in Spanish Venezuela. He was a friend with the slaves, and opposed injustices from his early age, helped by a teacher who instructed him on free thinking. This teacher would take part in a rebellion against the Spanish rule, which was defeated by the "Oidor" (grand judge of the Spanish crown effectively ruling Venezuela), and all members executed. Bolívar, just a kid, did not take part in it, but was aware of it and the outcome.

As a teenager he moved to Europe to study. He met the Queen of Spain and convinced her to change the "Oidor", and got married to María Teresa. Unfortunately, Teresa got ill and died right after visiting Venezuela.

From that point on, he started a military rebellion against the Spanish authorities in the Americas. He slowly drove the Spanish armies away, and created the unified "Gran Colombia".