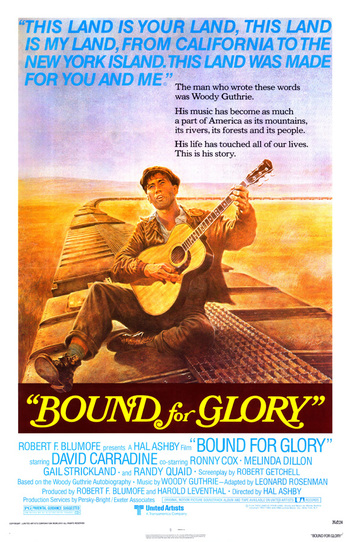 Bound for Glory is a 1976 film directed by Hal Ashby and starring David Carradine, about Woody Guthrie's career as a folk singer and union activist during The Great Depression.

The film opens with Guthrie (Carradine) struggling to survive in the Dust Bowl in Texas in 1936. He struggles to find work as a singer or sign painter, but comes up empty. Needing to support his wife Mary (Melinda Dillon) and their two children, Guthrie lights out to California, meeting people along the way and seeing the poverty and desperation afflicting so many in America in the '30s.

Guthrie finally makes it to California, only to find that it has its own poverty and deprivation, with desperate Dust Bowl immigrants picking vegetables for starvation wages while farm owners send club-wielding goons to stamp out union organizers. Together with Mary — aka “Memphis Sue” — and their friend Ozark Bule (Ronny Cox), Guthrie finds success as a singer on the radio, but he has to balance the demands of his job, and his wife's demands for support, against his social conscience.